Sat in the heart of the Dover Downlands lies a badly neglected area of old chalk grassland; Coombe Down. Whilst other nature reserves around it have been restored over the past few years, Coombe Down has patiently waited its turn.

Due to a lack of management since the 1950s, Coombe Down has become badly scrubbed over, losing some of the iconic chalk grassland species in the process. Indeed, it was the last site in Kent for the Frog orchid.

However, it can be saved and restored back to its former glory. In 2019 you have the chance to help us Uncover Coombe Down.

and reverse decades of decline

Since 2014 we have successfully purchased and restored both Old Park Hill and Nemo Down, and a new extension at Lydden Temple Ewell. Now, with your support, we can look to bring back another beautiful chalk grassland site. Click on the mapto the left to see our work in the wider Dover area.

Alongside this, our aim is to bring back species and processes that would naturally have been found at Coombe Down, and can create wildlife abundance again here.

The rare Frog orchid was last recorded in Kent at Coombe Down some 30 years ago, but we aim to return it to the slopes.

We could also use Coombe Down as a new site for the critically endangered Wart-Biter Cricket, and one day, the iconic Chough could return to the downlands, where it once soared centuries ago. All of this will be made possible by allowing our grazing herd to do their job, creating the condiitons for chalk grassland to return, and then thrive.

Find out more about the rare species you can help return to Coombe Down below.

Species you can bring back to Coombe Down

Coombe Down has a rich past, and with your help, we can uncover the scrub, bringing back chalk grassland habitat.

This will create conditions that could see the return of species long lost to the downs.

Find out more below:

There are existing walking routes through Coombe Down; restoration work will help to clear and widen these and potentially link them with other neighbouring sites such as Gorse Hill. The connections between all of our Dover downland nature reserves will help to give our threatened chalk grassland species a chance to thrive. Over time, restoration to chalk grassland will further enhance the wonderful views from the top of Coombe Down, from where you will be able to see our Old Park Hill and Lydden Temple Ewell Nature Reserves, as well as Dover Castle.

With your support we can start to clear the scrub covering this 19 acre reserve. By re-establishing grazing we can then encourage the return of butterflies like the Adonis and chalkhill blues, and Orchids like the pyramidal & fragrant.

Help us to uncover Coombe Down 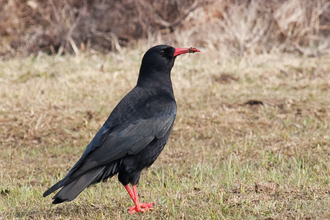 ...and see this iconic bird return to the Dover downlands
Donate now 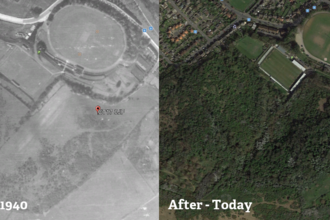 £100 will help us reverse decades of decline at Coombe Down...

...returning it to the open chalk grassland habitat that would have been seen in 1940
Donate now 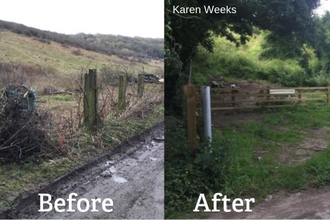