Kent Wildlife Trust volunteer, Margery Thomas, describes the snowy sights of the past month at Hothfield Heathlands and what we can look forward to in March.

Early February gave us a hint of spring but so much rain that the Konik ponies and Highland cattle were brought back from the sodden extension fields to the main reserve. Then came hard frosts and snow. Golden gorse flowers looked stunning on snowy branches, holly berries still gleamed, ivy berries were eaten, and all the bogs, puddles and pools including the recently cleared lower pools were frozen for over a week. Willow and birch twigs glowed gold and purple respectively against the white as rising sap deepened the hues. Bracket and jelly fungi on trees including the wobbling yellow brain fungus appeared in sharp relief. Buzzards and kestrels hunted overhead, foxes and rabbits left tracks in the snow, rodents scurried through tunnels of bracken and snow.  The ponies and cattle proved their winter hardiness, the ponies preferring to scrape at the snow with their hooves to uncover grass for grazing rather than eat the hay provided by the Kent Wildlife Trust. Pied and grey wagtails, year-round residents, followed them to pick up the insects disturbed by the ponies’ hooves.

Two birds that rarely appear in gardens were seen on the reserve in February. The goldcrest, even smaller than the wren, is hard to spot; well camouflaged despite pale underparts and a gold flash on the crown of the head, they are constantly on the move hunting for insects in trees. Goldcrests are resident here all year with some migrants joining them in winter. They rarely appear in gardens except in very severe weather. Numbers plummeted after the hard winters of the 1960s but have recovered well.

Redwings would have left their Scandinavian and Russian breeding grounds in September and October, flying at night, keeping in contact with a soft tseep-tseep. Some fly on further south, but those that overwinter here feed on fruit and mountain ash, yew, holly and hawthorn berries through the autumn. In snow, like their cousins the thrush and blackbird, they flick over leaf litter in woodland looking for snails, worms and spiders. Redwings have a speckled breast like the thrush and ginger-red flanks and under wings which are very obvious in flight. They hunt in loose flocks, often with other birds, and roost together in dense thickets, plunging in directly from a height.  They will return to breeding grounds in March and April. Migrant redwings in Scotland return to Iceland and the Faroes; as only a few remain to breed in northern Scotland and climate change may put these at risk, they are on the UK Conservation Red List. Sightings are always welcome as they don’t regularly visit the same place each winter, which also makes it difficult to estimate winter populations. Their migratory patterns have been linked to the seed dispersal of the wild service tree—a mutually beneficial relationship.  It was the research carried out on redwings in the late 1990s that first proved that birds detect fruit using ultraviolet vision which enables them to see UV light reflected by waxy coatings.

With the thaw and the arrival of March, we look forward to the first celandines, primroses, brimstones and other early butterflies and bees. Remember that insects and small mammals will still be hibernating as gardens are prepared for spring and hedges need to be left now to the nesting birds. Planting a rowan tree will provide food for redwings and other birds as well as nectar and pollen for insects.

If you see any of the pedestrian gates open, please close them. Paths on the reserve get very muddy through the winter. It’s best to wear the right footgear and walk straight through, enjoying the mud and the puddles, rather than round. This avoids widening the paths unnecessarily and trampling the fragile plants, including the seedling heathers and tiny ephemerals that grow on the close-cropped species-rich edge habitats. 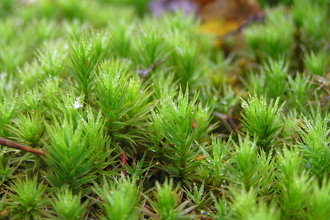 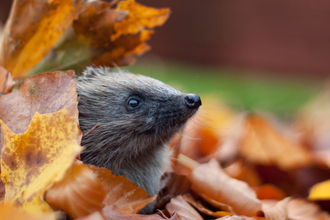 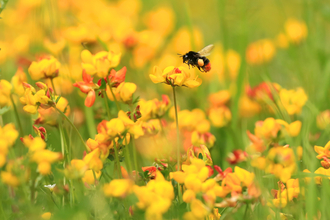 Margery Thomas explores the seasonal changes set to appear at Hothfield Heathlands in April, hopefully including the return of…

It’s harvest and hibernation time, some systems shutting down while embryonic life in the form of seeds fall and scatter, insect pupae…