In celebration of National Meadows Day, we thought we would share some interesting facts with you on Kent and the nation’s wild meadows.

Across Kent, some of us are fortunate to see small fragments of colourful flower-rich meadows. Unfortunately, 97% of meadows have been lost in the last 75 years; around 7.5 million acres. This is devastating as wild meadows play a fundamental role in supporting wildlife. One acre can contain up to 3 million flowers, which produces enough nectar to sustain 96,000 bees (Dr Trevor Dines – Plantlife; Radio4).

The Coronation Meadows Project, led by Plantlife and in partnership with The Wildlife Trusts and the Rare Breeds Survival Trust, is working to restore our natural meadows. This is done through the celebration of our surviving meadows, creating new meadows, and encouraging people to discover meadows local to them. For more information on the Coronation Meadows Project, please read more here

One of Kent Wildlife Trust’s flagship meadows is Marden Meadow, located near Staplehurst. This idyllic reserve serves to remind visitors of just how much of this classic English landscape has been lost. For more information about Marden Meadow and our link to the Coronation Meadows project click here.

Here are some facts about the common wild flowers you can see in a wild meadow:

A typical grassland plant, the Oxeye Daisy thrives on roadside verges and waste ground, as well as in traditional hay meadows and along field margins. Its large blooms appear from July to September

They are so bright that they appear to ‘glow’ in the evening, hence the other common name of ‘Moon Daisy’ or ‘Moonpenny’

Common Knapweed, also known as 'Black Knapweed', is a thistle-like plant that can be found on all kinds of grasslands, from roadside verges to woodland rides, clifftops to lawns. It is in bloom from June to September and is a huge favourite of all kinds of butterflies, including Common Blues, Marbled Whites and Meadow Browns, and is sometimes covered in these species.

Due to its hardy and fast spreading nature, Common Knapweed is considered an invasive weed in North America.

When the flowers of yellow-rattle fade, the brown calyxes (containing the sepals) in which the tiny seeds ripen can be seen and heard - they give a distinctive 'rattle', hence the common name. Yellow-rattle is an annual that thrives in grasslands, living a semi-parasitic life by feeding off the nutrients in the roots of nearby grasses. For this reason, it was once seen as an indicator of poor grassland by farmers, but is now often used to turn improved grassland back to meadow - by feeding off the vigorous grasses, it eventually allows more delicate, traditional species to push their way through.

Yellow-rattle is the foodplant for the larvae of two rare moths, including the grass rivulet.

One of the more evocative names for Common Bird's-foot-trefoil is 'Granny's Toenails', which gives an instant, and perhaps not-so-pleasant, impression of the claw-like seed pods of this abundant and sprawling species. Other common names include 'Butter and Eggs', 'Eggs and Bacon', and 'Hen and Chickens', which all refer to the egg-yolk yellow flowers and reddish buds. Widespread and found in all kinds of grassy places, from lawns to downlands, roadside verges to heathlands, Common Bird's-foot-trefoil can be seen flowering from May to September.

Common Bird's-foot-trefoil is an important foodplant for the caterpillars of the Common Blue, Silver-studded Blue and Wood White butterflies; the latter two species are both classified as Priority Species under the UK Post-2010 Biodiversity Framework. Its flowers are also a good nectar source for bees. 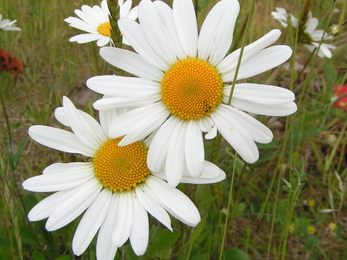 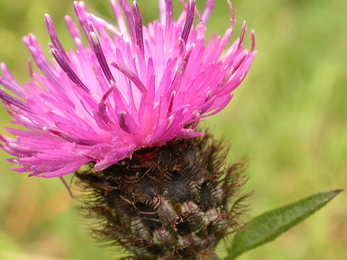 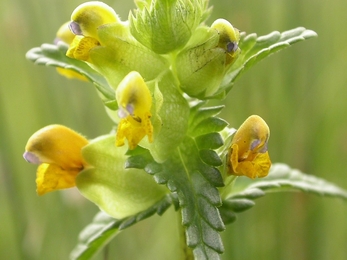 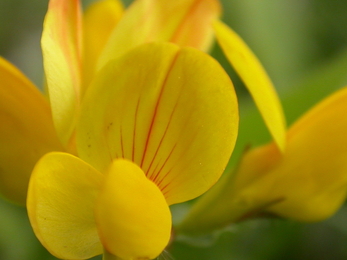